Photo from inside the Liberace Museum in Las Vegas. Liberace's Famed Bicentennial Hot Pants Outfit and mannequin. And the fabulous Siegfried and Roy photo opportunity, on the Strip in Vegas. 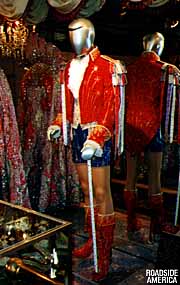 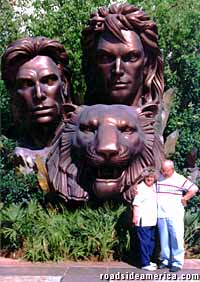 We are making the map of Hot Hubs and dates now. Josh suggested that the spiritual center of America is Las Vegas. No disagreement from anyone, so we have set the final hub there. ETA midday July 21 at the Circus Circus RV Park.

Vegas is a good hub for those who want to be part of the Rat Convoy of '99, but don't have the time/cash to invest in a longer adventure. From most cities in the USA you can usually find a cheaper flight to Las Vegas than you can to LA. Car rentals are also cheaper there. Also hitchhikers joining the Convoy in Sin City are a welcomed snack.

We'll sprint across the Mojave Desert sometime July 22. We've stolen powerful Chili recipes from all the wizards and we'll be adding our own choice seasoned Road Kill on the way.

"Chili that sets every wrong right. Chili to make Jesus jump back on the cross!"
Flamingo Chili by Werner Trieschmann

"I will fault this bloodless millennium. There is no milk to poop nor poetry to ply. Seriously. Replace the plum. Rot the veneer. Till then I'll gargle nasty phlegm"
Bolt's Dream by Robert Harders

"¹Tis a pity, too. What did I tell ya time and time, Jonas Spongeman. Dying's not half as fine as killing the lobster. The one you can only do once, the other as often as Jesus pleases."
Crossing by Paul Mullin

Josh hasn't been to his email for three or four weeks, but in general the plays that you wrights have been sending are too long. We need them Ten Minutes or less. Another way of saying that is, if the Ratmobile is traveling at 60mph, we need to perform your script within ten of those mile post markers. I put three scripts up at the Web site that look short enough, maybe. But after ten mile post markers, any pages left over will fly out the window. Please submit (resubmit) shorties.

We are also now trying to decide on a geographical center of the lower 48 for our main hub. Because the Rat Road between Austin and Minneapolis have become so real in its exchanges, near midway on Interstate 35, Kansas City is an obvious contender.

Wasn't there a thread on the rat-list once on where this USA center is? Donde?

This Web Page will expand with maps, recipes and dates as we go. Please post wishes and needs.